My own journey from academia to data-science was hard and annoying. The hard part was becoming a decent coder. The annoying part was the math. Not because the math was difficult, but because it was often written in such a boring way. I think the authors typically have practicality in mind, the math was merely a tool for them, and any abstraction needed immediate justification when used. That makes sense for the large readership of engineers and statisticians. However, it left me unsatisfied, and I suspect I am not alone. There is a small collection of people who actually enjoy abstraction for its own sake. We might be afraid to admit it, because we were trained to hide predilections that risk our chances at grant money, but this doesn’t change the truth of the matter. Now that I’m out of academia I feel safer admitting that I find abstraction fun, and an ends in and of itself. It is useful for the speed with which it allows one to transport logic from one domain into another. But it’s also fun. My hope is that this series will make ML more fun for a neglected audience with similar feelings.

If you’re a starving and idealistic mathematician, as I once was, and you are coming to the depressing realization that the ivory tower is a shadow of its past self, and now merely a zombie for promoting STEM initiatives and thus a puppet of private industry, come with me and step down into our cave. 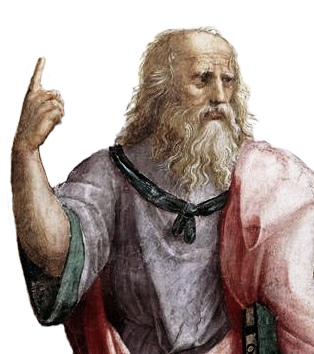 Plato’s allegory of the cave is roughly summarized as follows: A bunch of people are chained inside a cave and forced to watch shadow puppets dance on the wall until they think the shadows are reality. This happens to us every time we go to the movie theatre. If the movie is any good, we forget that we are staring at a blank wall with light projected on it. Once we leave the theatre, it’s not clear that we’ve really left the theatre. Perhaps our perception of reality is but a shadow of truth.

The notion of a shadow is mathematically represented as a map projecting the platonic forms into a space of observables. If reality were a sequence of statistically independent events then the model for such a reality could be easily mathematized. Our senses could be represented by a collection of random variables for . All of data-science is concerned with studying models based on finite collections of samples in this model of Plato’s cave. For example, what is the relationship (if any) between senses and .

Recall, a relation is a subset, , which we can think of as a generalization of a function. A function is represented as a relation by its graph, . In fact we can make this a functor .

Note that the embedding functor , is not invertible. Generally speaking, an arbitrary relation is not the graph of a function… sad face emoji. In supervised machine learning we’d like to do something like constructing a function from a relation… crying face emoji!!

So clearly the goal stated above is generically infeasible. Fortunately, our real goal is not quite so dumb. It’s almost that dumb though.

A labeled dataset consists of pairs, but it is NOT merely a finite set of pairs. Elements can be listed more than once, and so a labeled dataset is a finite multiset Multisets are a foundation for the field of probability. Therefore, we should probably be doing something probabilistic.

The goal of supervised machine learning is to construct a probabilistic function (a posterior) using a dataset sampled from a probabilistic relation (a joint distribution).

I’ll explain what these probabilistic functions and relations are next.

Let’s start by setting up some notation. If is a -algebra, we let denote the set of probability distributions over .

and two posterior distributions, can be composed via the law of total probability

This defines the category, where

We will think of as a probabilistic version of .1

Relations in the probabilistic category

There is a probabilistic analog to . A stochastic relation from to is an element whose marginals are and respectively. We’ll call this category .2

Something to note: is invertible!

The goal of bayesian supervised machine is to associate a posterior distribution to a labeled dataset, , sampled from an (unknown) joint distribution . In other words, given samples from a probabilistic relation, , we’d like to find a probabilistic function such that . Thank god is invertible.

If we knew the probabilistic relation we could produce the desired posterior. Let and denote the canonical projections We would define to be the posterior probability distribution

However, since se do not know , we can’t compute . So much for idealism. 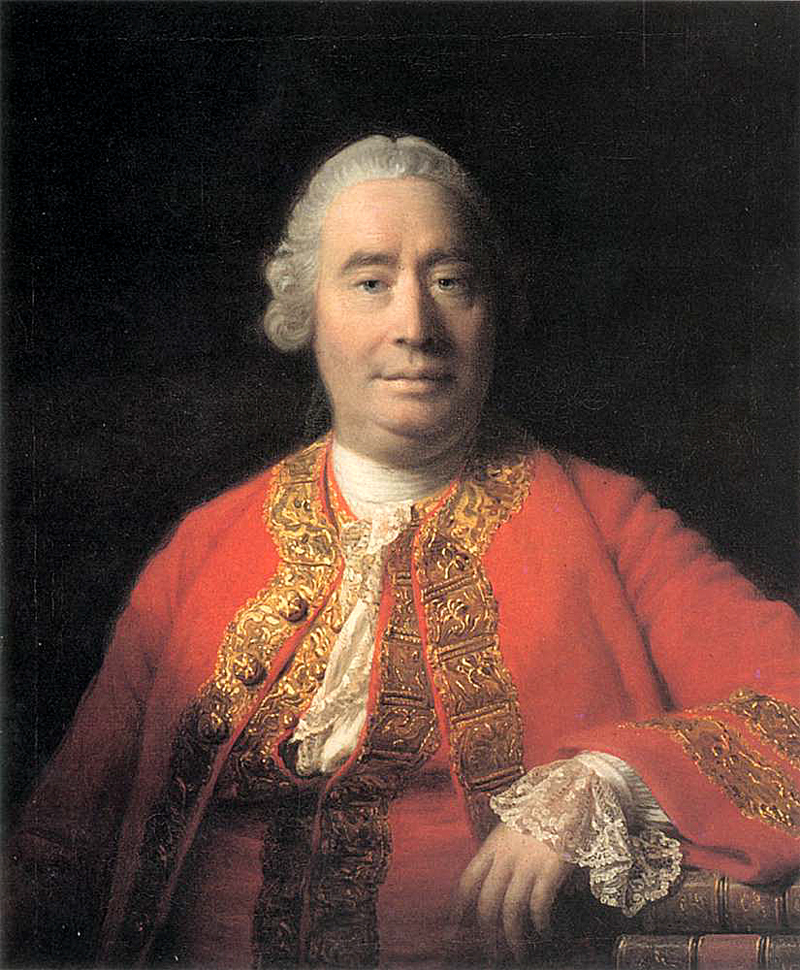 We might not know , but we do have a labeled dataset, sampled from . We should be able to approximate using the distribution where . In fact, for -algebras observed in practice, we weakly as .

In fact weakly as . This is a very conservative data-driven approach which people like David Hume (pictured above) may have advocated. His advice for anything not based upon direct observation was to “commit it then to the flames: for it can contain nothing but sophistry and illusion.”

I’m so punny. Feel free to take a moment, and allow yourself to stop laughing.

The solution, is (typically) a really bad solution. Sure, it converges (sort of). However, if is large convergence will be slow. This is especially true if either or are continuous random variables, so that . For example, if is a real valued random variable, then is then ill-defined for any value of outside of dataset. Such a failure will occur almost surely for any distribution of ’s with a support with non-empty interior. This phenomena is known as overfit and we’d say our solution has high variance and the resulting errors are known as generalization errors because our analysis failures to generalize to anything outside our dataset.

The war on variance

To ensure that our classifier does not fail outside of requires that we adopt an assumption. You need to take a risk in order to talk about data that has never been seen.

Typically one assumes the solution exists in some submanifold and then we choose the “best” element of as our solution.

We define “best” using some cost function which satisfies

and the continuity property

For example, the negative log-liklihood function

would do nicely. In this case

Then we can set

If then will converge to as the number of samples goes to infinity. Unfortunately, it is unlikely that , so this convergence is also unlikely. This phenomena is known as bias.

There are more creative things one can do, like making really large and then assuming a prior over to combat variance. This is known as maximum aposterior estimation (MAP estimation) but you will still suffer from bias. The only way to ensure bias is a complete non issue is to set and assume a uniform prior. But then you die from variance. F***, you just can’t win!

Fortunately these phenomena strike hard in different regimes. For small datasets, non-convergence at infinity is a pipe-dream and bias is the least of your worries. You should worry about variance for small datasets. Conversely, for large datasets you can reasonably expect to get close to the true value of the posterior, and worrying about bias starts to make sense.

I could tell you how to test for bias and variance, but that’s out of the scope of this blog-post. Let’s see an example

A loan application consists of a variety of numbers

We can represent an application as a single vector, and view the process of recieving such applications as a vector valued random variable, . As time progresses we will see some of these loans get paid back, or default. Let be the binary valued vector which is for default and otherwise. Our goal is to find a posterior where is just the Borel -algebra on and is just the standard algebra on objects.3 Note that because any distribution on 2 objects is represented by a biased coin (i.e. a Bournoulli distribution), and such coins are parametrized by the probability that they turn up heads.

Once we have a dataset , we can start to construct . First, consider the logistic function . This function has the graph depicted below.

The primary reason this is a useful function is because it maps to . Now we just need a map from to (because is valued). I’m tired, so we will just consider linear mappings, or maybe affine mappings (linear + offset). Therefore, let consist of posteriors of the form

for some and . This implies since only takes the values and . We see that is parametrized by and so .

Given our dataset we consider the (approximate) cross-entropy

And we solve for which is known as the Maximum likelihood estimate.

The function is convex, and so finding is not a problem. This procedure is known as logistic regression

These are not my favorite Christmas movies. They are my favorite movie recommendations. The distinction manifests in the fact that...

This is part of the "machine learning for disillusioned mathematicians" series. Let's get straight to it. ## Visualizing tables A...